Good news for Apple fans!
Ultimately, the tech giant has joined the micro blogging social platform, Twitter, days before the expected launch of the iPhone 7 on September 7.
@apple, the social media account of this organization has been proven as an authentic account by the verification done by Twitter; however, has yet to put up all posts. 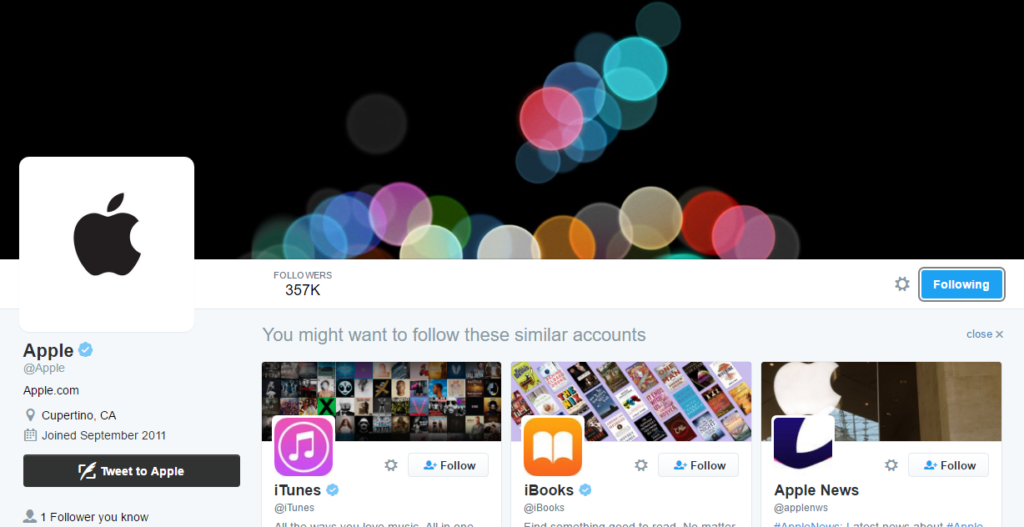 As of now, the company has over 3, 00,000 followers, and the bio easily reads Apple.com. The company’s bio also gives a statement that @apple joined the social giant Twitter in September 2011; however, the account has been unverified till now and has lain dormant also.

The sudden shift is really significant as the tech giant Apple has usually moved away from social channel as a two-way pattern of communication.
In most recent years, Apple has slowly again stepped into the social channels by opening accounts for Apple Music on Snapchat, Twitter and Instagram, and especially the Twitter account has been created for iBooks and iTunes.

Additionally, Apple is found active on YouTube also, but doesn’t allow anybody to comment on its posted videos. In fact, Phil Schiller, the marketing head and Tim Cook, Chief Executive also use Twitter.

The organization has even started live-blogging it’s all events on its official site; however, Apple will possibly use Twitter to live tweet the forthcoming event on 7th September, when the iPhone 7 is anticipated to be introduced.
One good deal is that the Twitter background image of Apple features the similar bubble picture used for promoting the launch event of the Apple iPhone 7.

So, we are really excited for this upcoming launch which is going to take place very soon. Stay tuned with us as well as social channels to get more details regarding Apple’s biggest launch event of this year.