According to the reports, Samsung sold more smartphones than Apple in the last quarter of 2015, thus improving its position in this competitive market. The figures from Strategy Analytics revealed that the Korean giant has sold 81.3 million smartphones in the Q4 last year. On the other hand, Apple sold only 74.8 million smartphones in comparison, as revealed by its official results released earlier this week.

A year back, Apple and Samsung were into neck to neck competition with each other during the Christmas period. Apple released its iPhone 6 and iPhone 6 Plus handsets, and pushed these devices closer to the smartphone from the Korean rival than ever before. 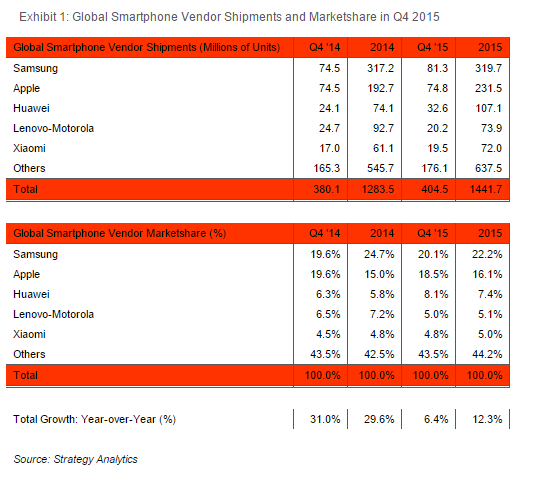 Now, Samsung has opened up with a healthy lead over the Cupertino’s giant, with a total of 22.2% market share while Apple has 16.1% only. However, keeping aside these numbers both the companies have revealed that they will struggle in the coming months. Apple said that it’s expecting to see the first ever decline in the sales of its iPhone device while on the other hand Samsung revealed that its smartphone business profits have slid at the end of 2015.