Samsung Galaxy S7 is turning heads throughout the mobile industry, since it was announced at the MWC event. Now, when you can buy this smartphone in most of the markets the excitement of the fans remains at all time high level. Despite this phone is getting positive feedback from the fans around the globe, but still Samsung can’t afford to take a break from working on it. As the competition in today’s world is quite high, so the Korean giant doesn’t want to keep itself away from the innovation any longer. 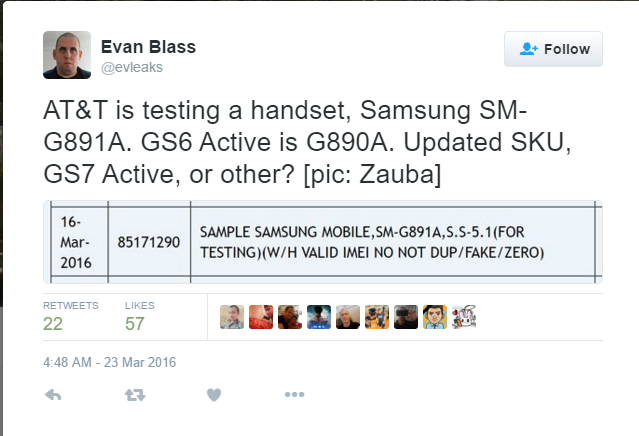 As per reports, a shipping report is picked up by Evan Blass, who is also known as @evleaks. The leakster suggests that the Korean giant is already working on developing a third member to the Samsung S7 family, the Galaxy S7 Active. This information comes from Zauba, which is a popular import listing from India, and does not confirm anything but just that Samsung’s phone is under testing currently.

The most interesting part of this listing is the model number of this smartphone, which is SM G891A. If we consider that the Samsung’s S6 phone bears the model number SM G890A, then you can see from where from the assumption for the aforementioned model number comes. If we give a look at the Galaxy S6 active, it was a better option for many users function-wise though it has a rough exterior. This smartphone offered buyers MIL STD 810G and IP68 protection for dust proofing and a bigger battery life. Samsung has also provided the Galaxy S7 and S7 Edge waterproofing and an expandable memory out of the box.