HTC has confirmed that its next generation flagship phone will be officially unveiled on 12th April. This smartphone was initially known as One M10 but is now been named as HTC 10. Today, the company shared some more information about its new handset. 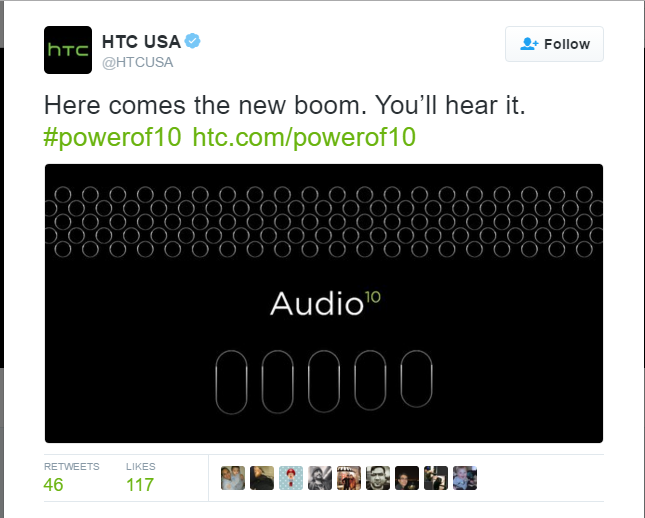 As per a new teaser, this device will get the “Boom Sound” technology from the Taiwanese giant. We know it well that the BoomSound is among the trademark features of the tech giant’s previous flagship devices such as One M9, M8 and M7. All these smartphones are well known for delivering superior sound, with a combination of dual front facing speakers, built-in amplifier and software optimization.

With this new teaser image, the Taiwanese giant is trying to tell that the speakers of HTC 10 have a smaller footprint. These will be as powerful as the ones available in the older One M flagship devices. Apart from the BoomSound, this smartphone is also expected to feature a 5.1 inch or 5.2 inch Quad HD Super LCD 5 display.

There wit will be “World First, World Class, front and back” cameras, which was recently confirmed via teaser. It will come packed with 3,000 mAh battery and 4GB RAM for faster processing speed. HTC has provided it with the latest Android Marshmallow operating system with Sense 8.0 user interface. Just like the other flagship smartphones such as Samsung Galaxy S7 and LG G5, the HTC’s 10 will be powered by the Qualcomm Snapdragon 820 chip.