Skip to content
Zapact » Blog » What your mobile phone data indicators mean and how fast is the internet on your phone?
loading...

You can connect your smartphone to the internet via a variety of modes over a mobile network. There is an indicator at the top of the screen of your phone which not only shows you the signal strength but also tells you the type of connection you are using. This indicator gives you an idea of how fast you can expect the data services of your smartphone to perform.
If you have a faster connection type, you will be able to download or upload the information more quickly. With a faster internet connection, it becomes quite easy to perform the tasks such as online gaming and browsing the internet. On the other hand, the speed of a data connection does not affect the amount of data used.

Airplane Mode:
The airplane mode comes to work when the radios of your phone such as mobile, Wi-Fi, Bluetooth radios are switched off. In this mode, no connectivity is active but you can still use the apps and services which don’t require any kind of data connection to function properly.

No Signal:
This is a greyed out satellite icon which donates that your phone’s radio is active but it has no discernible signal. This is preventing you from making or receiving the calls, texts or using any data services.

This is often marked by letter “G” on the phone’s display. GPRS (General Packet Radio Service) is the slowest form of data connectivity and is generally used only if the phone is unable to find any of the faster service due to the location or interference circumstances. This kind of mobile data connection was available in the original iPhone from 2007.

EDGE:
It is usually denoted with “E” and is also known as eGPRS. This connectivity option fills up the gap between 2G and 3G, having theoretical speed of 400 kbps. If your device is not able to find a 3G or faster connection then you should surely opt for EDGE.

3G Connectivity:
This stands for 3rd generation and is seen quite often on the top of your smartphone display. Previously, it was the standard for top mobile data speeds in the countries like UK. The 3G offers the users with the data speed i.e. double that of EDGE with upto 384 kbps. Apple’s iPhone 3G is often called as iPhone 3GS to boast its improved data speed. 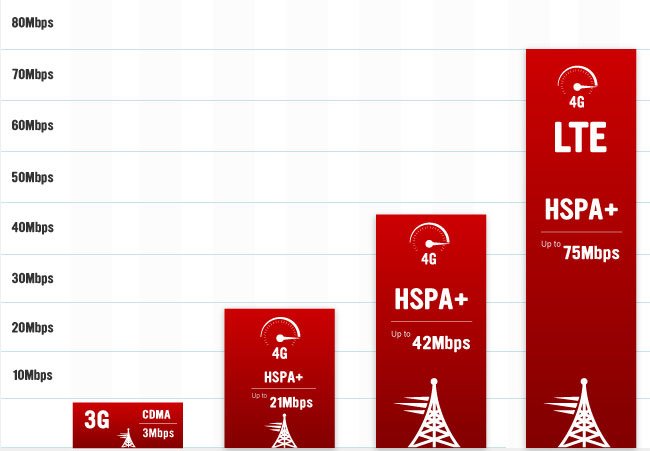 HSPA+:
This is the latest form of 3G mobile data technology and “H” on the modern smartphones stands for Evolved High Speed Packed Access. On the basis of different network and devices, the speeds accessible for HSPA+ can be both 14.4 Mbps and 21 Mbps, while 42 Mbps is also possible on some networks.

4G Connectivity:
The 4G service also known as LTE or Long Term Evolution is recently launched in UK and is the fastest connection type available. However, the US users are already benefiting from 4G speeds for some time now that offer them theoretical values upto 10 times i.e. of HSPA+ speeds with upto 160 Mbps. Presently, the 4G plans in UK are more expensive than the 3G plans available currently.