Samsung Galaxy J7 2016 is caught again in a benchmark database. However, this time we are treated with the details of the Exynos version of this handset and from two different benchmarks i.e. GeekBench and GFXBench.

It seems that just like its predecessor the Korean giant will released two models for the original Galaxy J7 handset. One of these models will run on Samsung’s own Exynos chip and the other one runs on the Qualcomm Snapdragon 615 chip on board. 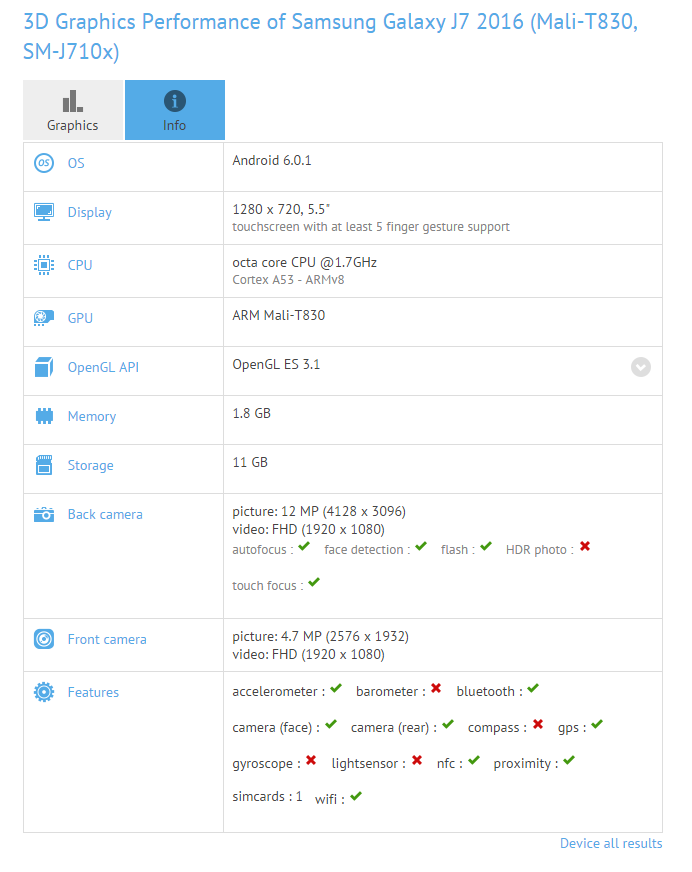 However, the Exynos S0C chipset inside the Galaxy J7 phone will be the new one i.e. Exynos 7870. This chip is the successor of the Exynos 7580 chipset found in the previous J7 handset. Samsung’s previously released Galaxy J7 smartphone will be powered by an octa core processor with Cortex A53 architecture clocked at 1.7 GHz speed in these two tests.

Samsung S7 has a 5.5 inch Touchscreen display with 720 pixels resolution. This phone has a Snapdragon chip and 2GB RAM. There is a built-in storage of 16GB, a 13MP rear camera and a front facing sensor of 5MP count. Samsung’s Exynos powered Galaxy J7 phone runs on Android 6.0.1 Marshmallow software in the benchmarks.