According to the recent reports, HTC is expected to unveil its next flagship smartphone, One M10, at a dedicated event and not at the MWC event to be held in Barcelona in the end of this month. Though, this is wise step seeing that both the LG G5 and Samsung Galaxy S7 will be launched on the same day ahead of the MWC event.

Recently, a list showing the specifications of this upcoming M10 phone was leaked and today we are being treated with an alleged live image of this handset. It can be seen in the image that the HTC logo is missing from the front of the M10 phone nor there is any black bar as found in the previous One handsets from the company. However, there is a fingerprint scanner and Home button under the screen.

There are power and volume buttons on the right side of this phone, with the former nicely ridged. This lets you guess the buttons easily without even looking at them. Also, there is no front facing speaker underneath the display, so we can assume that the BoomSound will be missing for this smartphone. 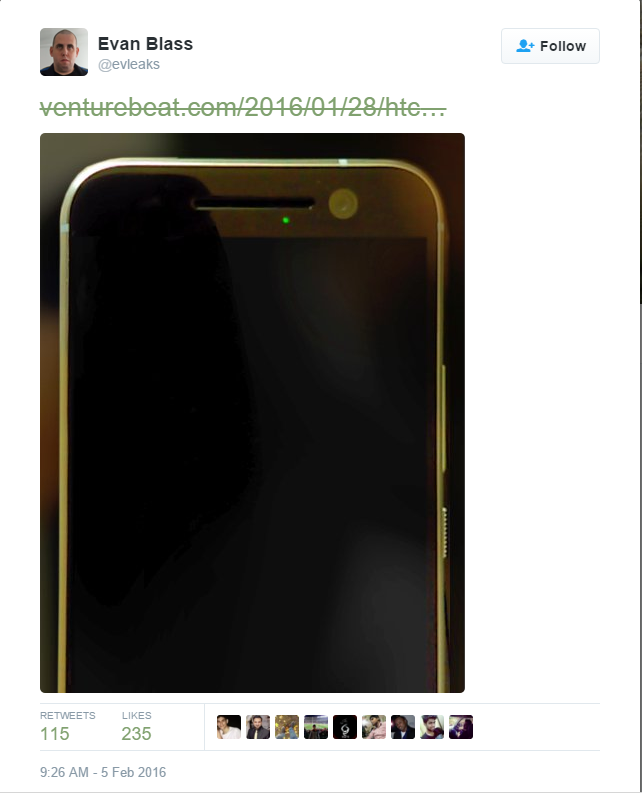 This leaked image is out as the courtesy of @evleaks, who is a reliable source and has shown many real time images in past as well. The image shows that this phone will resemble a bit to the HTC One A9 and not the previous handsets of the company.

For specs, the One M10 smartphone is expected to come in a full metal construction just like the predecessors. It will get a 5.1 inch QHD AMOLED Touchscreen display and will be powered by a Qualcomm Snapdragon 820 chipset. There is an internal storage of 32GB which is expandable using microSD slot and 4 GB RAM for fast processing.

HTC has provided this handset with a 12MP UltraPixel rear camera with laser autofocus and optical image stabilization. It will run on the latest Android 6.0.1 Marshmallow with the Sense 8 UI on top.