Samsung will launch its new flagship phone S7 and S7 Edge on 21st February i.e. just two weeks ahead. There were some reports revealing the US FCC approval for both the Galaxy S7 and Galaxy S7 Edge smartphones. A few details on the specifications were revealed on these FCC filings such as supporting networks and connectivity options. Now, a new FCC filing for both the S7 and S7 Edge phone has appeared confirmed the battery size for the Galaxy S7 Edge model. However, these documents put detailing only on the South Korean version of these smartphones. 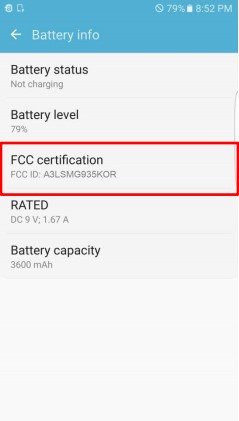 The connectivity options for the South Korean variant of this handset include NFC, Bluetooth, Wi-Fi IEEE 802.11 a/b/g/n/ac etc. Also, the FCC docs reveal the model distribution which is as follows: SM-G935S model number represents the SK Telecom version, SM-G935K is for the KT version and SM-G935L will be the LG U+ variant.

FCC documents for the South Korean variant of S7 phone confirm model numbers to be SM-G9305, SM-G930K and SM-G930L for SK Telecom, KT and LG U+ mobile networks. This phone is expected to get Bluetooth, WiFi IEEE 802.11 a/b/g/n/ac, NFC as the connectivity options. The FCC docs did not mention any other details about these handsets.

Samsung’s S7 is expected to get a 5.1 inch display and will be powered by the Qualcomm Snapragon 820 chip in some market while the other markets will get this handset with Exynos 8 octa processor. This handset sports 4GB RAM and will come with an internal storage of 32/64GB inbuilt on the phone. It runs on the Android 6.0 Marshmallow operating system and has a 3,000 mAh battery backup with the necessary connectivity options. There is a 12MP rear camera and a 5MP front facing snapper for clicking better quality selfie images.

The S7 Edge was spotted on the GFXBench database recently with its key specifications. The device is expected to get a 5.5 inch display with 1440 x 2560 pixels resolution and runs on the latest Android 6.0 Marshmallow OS. There is a 3,600 mAh battery and it will get power from Qualcomm’s Snapdragon 820 SoC or the Exynos 8890 processor and a 4GB RAM. There is a 32/64 GB inbuilt storage and a 12MP rear camera and 5MP front facing camera.