The first and the foremost feature of blackberry is display. The device has 5.4 inches of display with AMOLED capacitive touch screen. The device has 16 m colours which brings out nice clear images. The device has a resolution of 540 ppi pixel density. It is multi touch and has corning gorilla glass 4 on the top to save the device from scratches and make it durable .the best part is the device has a curved edge screen which really makes it attractive. The device has QWERTY key board as well. Nano sim is required to start the device and it weight around 192 gms.

Then, it comes to an Operating system. The black berry Priv has a latest operating system which makes the device fast and easy to use. the device has chipset of QUALCOMM snapdragon accompanied with Dual core 1.8 GHz Cortex A-57 & quad core 1.44 GHz Cortex A53. The device brings out nice clear graphics in images, videos and games as graphic card Adreno 418 is installed in it .

Next, it comes to memory. The blackberry Priv has an internal memory of 32 GB with 3 GB RAM. It really makes the device fast and let the user to enjoy hassle free browsing. The device has a space for Micro SD card. Therefore memory can be expandable up to 200 GB. The user will not face the problem of saving excess of data. The user can save as much data as they want.

What experts think about the Blackberry Priv?

According to cnet.com, The BlackBerry Priv delivers strong performance in a sleek, solid package. The subtle tweaks to Android are useful, and the compact keyboard packs in useful functionality. It’s also fun to slide open, over and over again.

According to androidauthority.com, BlackBerry literally slides into the Android space by bringing back a feature that we haven’t seen from a flagship-level device in a long time, a hardware keyboard. Taking a look at the rest of the device however, Blackberry has done a good job of making it fit into the general Android lexicon. The large 5.4-inch has no capacitive keys accompanying it, and the very bottom portion of the phone does not slide, but houses a front-facing speaker.

According to verge.com, the software is also optimized for the keyboard — no mean feat, given how few Android phones have bothered with them anymore. From the home screen, you can long-press keys to quick-launch shortcuts, and you can also just start typing to trigger a search (though sometimes the search app misses a keypress here and there).

In all, the blackberry priv has all the best features. It has a latest operating system of android. The expandable memory. The device is sleek and nice it is multi touch and have QWERTY keyboard as well. The device has sharp primary camera which brings out superb images. The device is useful for business purpose as user can do receive mails; prepare presentation on the device as well. Nice and best device by Blackberry.

Process to enable and edit the keyboard shortcuts on BlackBerry Priv

BlackBerry Priv is the first android phone of the company and is recently announced in some more European nations. Previously, this smartphone was available for purchase on the Shop BlackBerry only but now it can also be purchase from a retailer in UK. Today, we will show you how to set up and use the […]

After the discovery of stagefright vulnerability last year, Google and some Android manufacturers committed to deliver the monthly security updates on time. This was to make it sure to the users that their phones will never be exposed to any kind of threats. As soon, BlackBerry launched its first ever Android phone Priv, it also […] 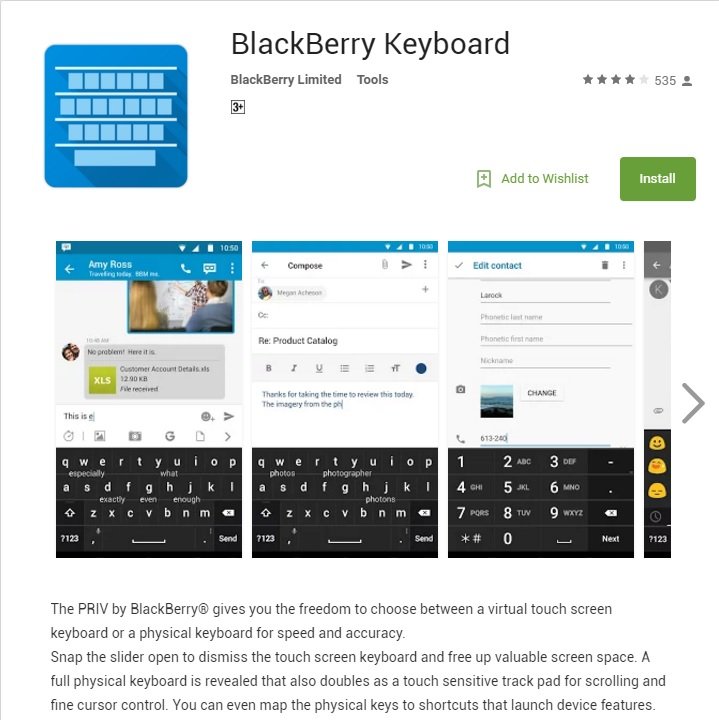 BlackBerry Priv is a solid android smartphone and has now received a number of stock app updates from the manufacturer. As per reports, the keyboard app, the camera app and the launcher are updated to bring some notable improvements. The keyboard app for this smartphone now comes with a smart prediction engine that can scan […]

BlackBerry Priv Contract refers to handset and tariff plan deals sold by network including monthly allowances of call minutes, texts and internet data. In these deals you pay the handset cost in installments over the period of contract duration.

We compare all the BlackBerry Priv deals, offered by networks and retailers in the online UK market. As we have found direct offers from network providers like EE, O2, Vodafone etc are rarely competitive to resellers. If you were purchasing phones directly from networks, you may be surprised by these prices.

As the cheapest deals are always offered to new customers, so you are eligible for that. Grab the best contract on BlackBerry Priv with us for maximum saving. Below are the steps of porting a number.

Refurbished BlackBerry Priv is the devices, which were sent back due to any fault or under any exchange plan or any other authorized reason by its previous owner. However these are checked and restored to fully working condition if necessary.

You may have found few contracts on BlackBerry Priv, inclusive a cashback. It can be redeemable or automatic in nature. It reduces your effective cost of the overall contract but doesn’t effect on your monthly payments. Few retailers may have shown it as discounted monthly line rental but we have shown it separately to make it clearer.