Microsoft has now launched its Lumia 650 handset, which is reported to be made for enterprise. This smartphone features a 5 inch display with 1280 x 720 pixels resolution but the remaining specifications are quite lacking. It comes powered by a Snapdragon 212 chipset with a quad core processor under the hood clocked at 1.3 GHz speed. There is a 2,000 mAh battery and 1GB RAM for faster processing.
Now, there are reports that Microsoft has posted a support page for this handset which links it to a user guide for this smartphone. The listing for the guide on the support page mentions the name Cricket. As we already know, Cricket was the first US carrier in the year 2015 to offer Microsoft’s Lumia 640 mid-range phone. And now it looks like Apple is all set to do the same thing with the successor of this handset in 2016 as well.

Thus, Cricket will sell the Lumia 650 phone which is just made official by the tech giant and this confirmation comes from the Microsoft’s official website, from the support page for this handset. Microsoft enables you to download the “Lumia 650 User Guide Cricket” in PDF form from this support page of the Lumia 650 smartphone.

Above information leaves us with no doubt that the newly launched smartphone of the tech giant will be offered by the retailer Cricket. However, where other retailers are already taking pre-orders for this smartphone overseas with 18th February to be the expected date of its release, Cricket on the other hand will start selling the Lumia 650 from April this year.

Microsoft’s phone will be priced at $200 at Cricket and while this model has the latest Microsoft office applications pre-installed. On the other hand, most of the businesses that plan on giving this phone to their employees will purchase it via other available channels. Also, there are reports that Cricket will sell this handset to consumers as a low cost phone which will go along its pre-paid service.

Microsoft Lumia 650 was expected to get released by 1st February but now the phone is delayed until the mid of next month. Now, as we all are waiting for this smartphone to get official following a huge number of leaks, there are some reports suggesting that the phone already went up on pre-orders.

An online retailer in UK, MobileFun, has this unannounced phone available for pre-order and has priced it at £199, for the SIM-free and unlocked versions. However, the company has not yet mentioned any shipping date for this Lumia phone but we assume that it might be launched soon after its announced in the mid-February this year. There are also some reports suggesting that this handset could be the last Lumia phone from Microsoft.

This phone will come packed with a 5 inch IPS Touchscreen display and 720 pixels resolution. There is an 8MP rear snapper with LED flash for better quality clicks even in low light or sim light. It is powered by a quad core processor with 1.1 GHz clock speed and 1GB RAM for faster processing speed. For connectivity, there are many options such as Bluetooth, Wi-Fi, and GPS. There is a 2,000 mAh and runs on Windows 10 operating system.

This phone was available to pre-order on MobileFun at http://www.mobilefun.co.uk/sim-free-microsoft-lumia-650-lte-unlocked-black-p57611.htm url. But now it has been taken down.

Microsoft was expected to launch its new Lumia 650 handset by 1st February this year but now the source claims that this handset will not rolled out until mid-February. Apparently, we can say that the introduction of Lumia phone is delayed until mid of the coming month.

According to the reports, the reason behind this delay is some kind of software issues reported on this Lumia handset from Microsoft. This information could be believed as true because the source is quite close to the matter.

There were some news recently that Microsoft will not make this handset official at any launch event but it will be launching the Lumia 650 phone via a blog post from the company. However, this could also be the case that Microsoft has made the users to wait some more to get hands-on with their Lumia phone. As the announcement is delayed, we are assuming that this new handset will become available for purchase soon after it.

There is also some information that the metal edge of this smartphone is laser cut, which means that it is going to be matte on both the sides but is shinier on the edges. Microsoft’s Lumia 650 handset is also said to be the only new Lumia branded phone that is being launched by the manufacturer this year. And it’s also reported that the company has no plans to launch another Lumia phone in 2016. Also, there are some rumors that this could be the last Lumia phone from Microsoft.

Microsoft Lumia 650 in under rumors since past few months and recently got nearly official confirmation from a senior executive from the company. The upcoming Lumia 650 is a mid-range phone from the manufacturer and has already got some leaked renders last month also. Now, the reports reveal that a new live photo for this handset has appeared online which has confirmed the design that we got to see in the previous renders as well as has the Intel logo on the specs.

These leaks have appeared as the courtesy of a person who accessed the prototype unit of the device referred by codenames Saana or Sansa. Looking at the specifications, this upcoming phone doesn’t show much upgrade to the last years Lumia 640 or much of a step up from the lower end smartphone, Lumia 550.

Microsoft has provided the Lumia 650 phone with a 5 inch LCD display with 1280X720 pixels resolution. So far, we were receiving rumors that the phone will get Snapdragon 212 chip but now the sources reveal that it will come powered by a Qualcomm Snapdragon 210 chip, which is also used in Lumia 550.

However, there is not much difference but only that the Snapdragon 212 has higher clock speed at 1.3 GHz while on the other hand the Snapdragon 210 will be clocked at 1.1 GHz clock speed. The processor will have quad cores and the phone will also be provided by a 1GB RAM. 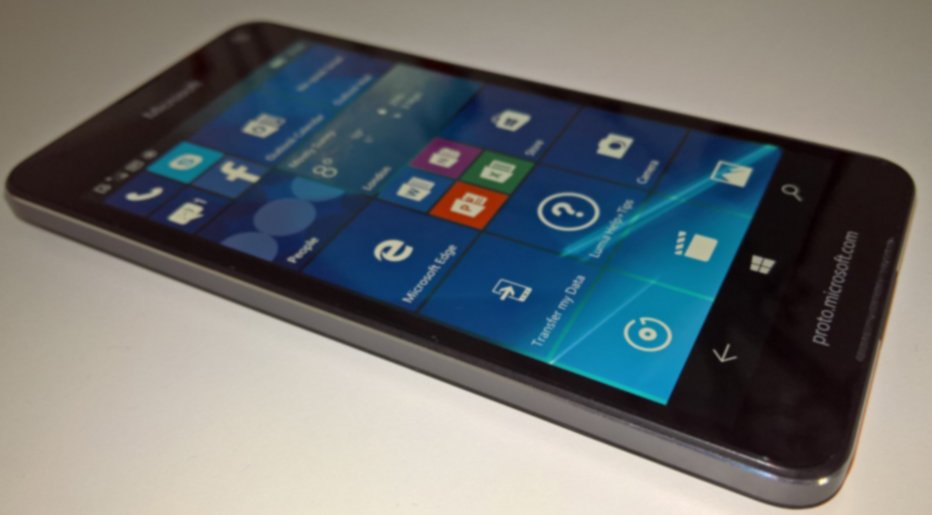 There is a 2,000 mAh battery backup, alleged capacity is less than the previous versions Lumia 640 and 550 respectively. Microsoft Lumia 640 was powered by a 2,500 mAh battery while the Lumia 550 was packed with 2,100 mAh with more stand by in comparison to the upcoming Lumia phone.

Microsoft’s upcoming Lumia phone looks even more luxurious in hand than the latest flagship, Lumia 950 but it’s entry level processor and lack of LTE makes it less attractive for the potential customers.