Lenovo seems to have an intention to keep the Moto X and Moto G lineups to get even better financial results. It is suggested that the Chinese maker is hoping even for substantial profits in 2016. This information is confirmed via a fresh set of images depicting early prototypes of some of the future devices of the manufacturer. The design shown in the pictures confirm that these handsets are definitely from the Moto family.

However, there will be some similarities between the Moto X and Moto G phones for 2016 but these will also be kept quite different from the current versions of these handsets running in the market. According to the reports, Moto X 2016 edition will get a slimmer metal body. This new feature of this smartphone is confirmed by its pictures leaked, although it is still difficult to get a view of this phone. 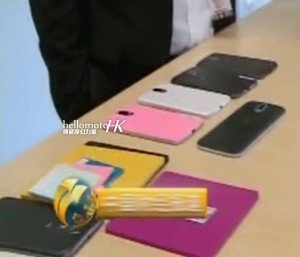 According to the pictures, one thing is unmistakably present on this smartphone i.e. the signature ‘M’ logo on the back of this handset. However, it is rather encouraging to see the logo in the light of the confusion created by Lenovo’s announcement recently. It was said by the Chinese maker that it will be phasing out the Motorola brand from the smartphones.

These issues were luckily cleared up later and Lenovo confirmed that it will go through a much more sensible plan to shift its focus towards the more ‘contemporary’ Moto brand. Coming back to the shots surfaced, the second batch shown with more colorful units is the Moto G. The resemblance of the upcoming Moto G is more apparent from the current generation phone of the company.

We can also see a signature camera with a Moto sign, showing curves at the bottom and top of this smartphone. The swatch of back panels fall inline in a variety of colors with the customization option that is currently available only with the G series from Motorola. Another noticeable detail is that there is a Lenovo logo on the back plate of this handset.