Samsung anger many Note fans in Europe last year by not releasing the Galaxy Note 5 phone in the continent. We can’t comment on the reason why Korean giant chose to release only Galaxy S6 Edge+ in Europe and not the Note 5 device, at first. However, the Note 5 phone became available for the users in Europe as well. On the other hand, many early adopters were not happy with the fact that they were forced to pick up a smartphone with a curved screen when they wanted to get their hands-on a S Pen.

Now, there are reports that Samsung has learned from this torment and will never repeat the story of 2015 again. Also, the strategy of the company for its upcoming phone is exactly opposite in UK atleast. As per reports, the Korean giant will bring the Note 6 smartphone to UK from the beginning while on the other hand the Galaxy S7 Edge+ will never be released in the country. We can assume the same thing for continental Europe as well.

This information came out from a source which is reliable as one of the major UK networks. The reason for this change in the strategy of the company has to do totally with the blacklash from the Note fans in the country. Also, the sales reported from S6 Edge+ in UK were not upto the marks; this might be the reason why the users in the UK will not see the successor of S6 Edge+.

Samsung will release its upcoming Galaxy Note 6 phone sometime in August this year. Currently, the company is busy with the S7 and S7 Edge smartphones expected to be announced on 21st February, a day before the MWC event in Barcelona. Both these handsets will go on sale in early March.

Samsung’s S7 phone recently passed through 3C certification, which is a compulsory certification in China. Thus, confirming that it will soon be rolled out in the country. Now, there are reports that an image of this smartphone is leaked via @evleaks revealing the back design. In Europe, this phone is expected to be launched on 11th March, 2016. 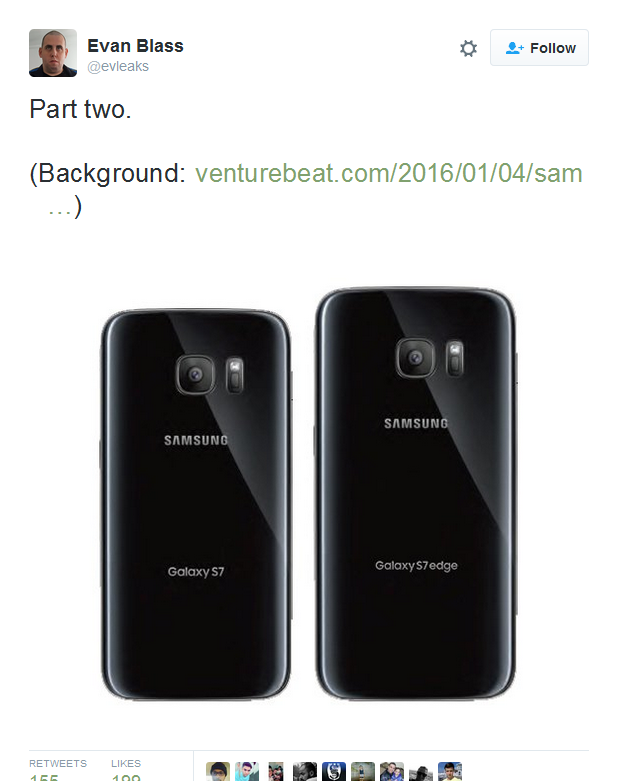 According to the reports, the leaked photo shows the backs of both the Samsung Galaxy S7 and Galaxy S7 Edge handsets. The photo reveals Samsung’s plans to retain the glass design on its upcoming flagship phones. Here we are assuming that the Galaxy S7 and its variants will get a similar back to the Galaxy Note 5, which is slightly curved towards the edges.

According to the previous leaks, the phone is supposed to get four versions i.e. Galaxy S7, S7 Plus, S7 Edge and S7 Edge Plus. For specifications, we expect a choice between the Exynos 8890 and Snapdragon 820 chipsets. There are also rumors suggesting for a 12MP rear camera with ½.0 inches sensor. Samsung has now officially announced that it will reveal the Galaxy S7 smartphone on 21st February Sunday in Barcelona, one day before the MWC 2016 event.